Tati Fuchs surname is related to the building of the Montserrat Mountain Range rack and pinion railway line.

Her grandfather, Julian Fuchs y Leigme, originally from Switzerland, was given the post of Operations Manager for the Montserrat line between 1897 and 1925.

On 26th May, 1925, the monks of Montserrat monastery asked Julian Fuchs to inspect the new road. It was a rainy day and Julian fell ill with pneumonia. He died as a result of his illness. Monsieur Fuchs was 55 years old.

His disappearance was very much felt amongst the local community, as he had carried out numerous projects, not only on the rack railway, but also to promote the growth of the town of Monistrol. The name of Julian Fuchs has remained closely linked to the town. The townspeople built a monument in his honour and dedicated a street to him, as well as christening the Number 6 locomotive with his name.

Julian Fuchs married Marga Neus Claparols and they had two children. The youngest, Pedro called his first daughter, Montserrat in memory of the very same mountain, which had meant so much to his father. Montserrat Fuchs, known as Tati Fuchs, together with Enrique Vidal, founded Bodegas Capità Vidal and the Cava Fuchs de Vidal (sparkling wine) came about from this union. 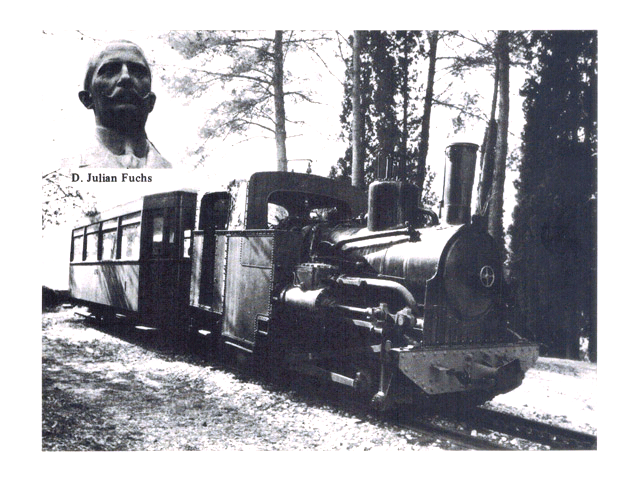 This website uses cookies to improve your experience while you navigate through the website. Out of these, the cookies that are categorized as necessary are stored on your browser as they are essential for the working of basic functionalities of the website. We also use third-party cookies that help us analyze and understand how you use this website. These cookies will be stored in your browser only with your consent. You also have the option to opt-out of these cookies. But opting out of some of these cookies may affect your browsing experience.
Necesario Always Enabled
Las cookies necesarias son absolutamente esenciales para que el sitio web funcione correctamente. Esta categoría solo incluye cookies que garantizan funcionalidades básicas y características de seguridad del sitio web. Estas cookies no almacenan ninguna información personal.
No necesario
Las cookies que pueden no ser particularmente necesarias para el funcionamiento del sitio web y que se utilizan específicamente para recopilar datos personales del usuario a través de análisis, anuncios y otros contenidos integrados se denominan cookies no necesarias. Es obligatorio obtener el consentimiento del usuario antes de ejecutar estas cookies en su sitio web.
SAVE & ACCEPT